Why Animation is Still an Alluring Career Option in India? 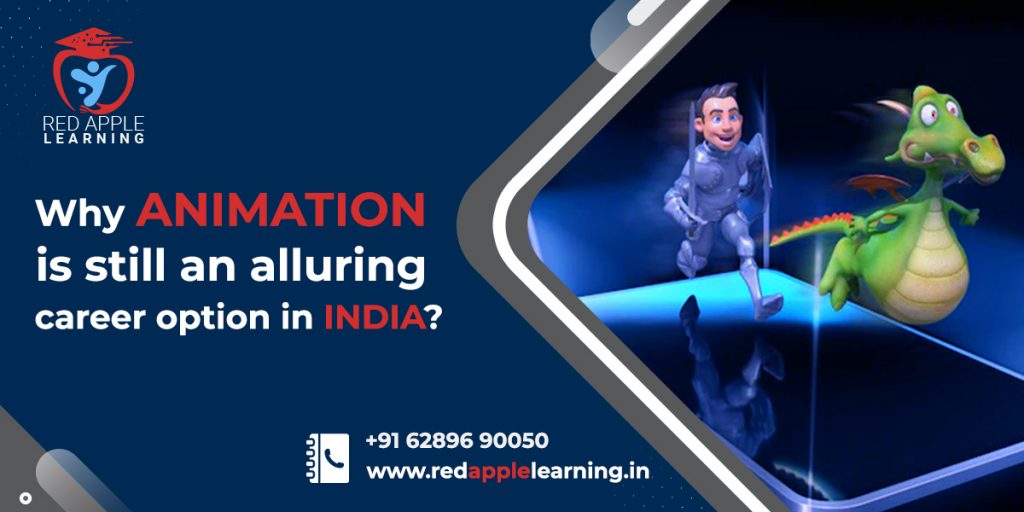 Animators and artists have advanced with the tools and methods they employ since the beginning of the industry in the 1800s. Every project is given their all-out effort by artists, whether it be 3D animation or claymation. It’s safe to argue that the animation sector has a promising future.

Key Factors Responsible for the Animation Being an Alluring Career Option:

There has been rapid growth in the young population who are interested in animation-related careers.The demand for out-of-the-box thinking, imaginative, and innovative animation professionals is simply huge. Number of jobs available is massive but there is a shortage of skilled professional animators. As a result, there is a job security for the aspiring professionals.

Recent years have seen an increase in investments in the field of animation. That has led to more technological integration and innovations. Technological advances such as virtual reality (VR) and augmented Reality (AR) are now a common part of animated film production but also play a key role in creating immersive advertising experiences, as well as increasing revenue opportunities for animators through games and app development or even video-based content.

The use of VR and AR  is allowing animators to create a completely new media experience that combines an actual physical reality with a digital plane. AR is going to be an extraordinary growth area. Well, we can see the same trend being repeated in VR as well. They will act as a perfect way to create dynamic storytelling animation videos. The adoption of these technologies will continue to grow over the coming years as well. These new approaches help to break the boundaries between different media types.

There is an unfathomable demand for all kinds of animated content on OTT platforms like Netflix and Prime. That is gaining huge popularity. Animation in a wide range of styles and genres is well-received by audiences. This demand is creating opportunities for the creation of many types of original animated programming. Studios all over the world are working nonstop to produce something unique for the viewers. It is also to note that India is one of the key players in terms of producing a huge amount of animated content as well.

Animation taking over other options

Animated films are no longer restricted to just the cinema screens, they now play a major role in a wide range of marketing, corporate, and product-related ads which are becoming ever more prominent due to their natural appeal over static images which give more emotion to the viewer and also helps in creating a social buzz as well as increasing brand awareness. It is widely recognized that animation is going through a revolution in terms of its application. In the past it was limited to just the screen of a big screen or a small TV, now it is being used in almost every sphere of life including in advertising and product branding. Additionally, utilizing an animated character as an endorser rather than a celebrity can save money.

Another market that contributes steadily to the growth of the animation business is the video game industry. Gamers are shifting to options that provide them with various levels, a diverse cast of characters, and distinctive gaming landscapes. Additionally, numerous OTT services are creating dedicated tabs for this content, and more stations that broadcast animated television series are appearing on TV every day.

Not only the above points gave us an overview of the key players that are responsible for the animation to be an alluring career option. But for aspiring animators “the growth of the industry” also becomes one of the most fascinating factors as well. Now lets us throw some light on what is the current scenario of the animation industry in India.

The animation industry is one of the biggest sectors in world entertainment. The Indian animation business is expanding at a high pace. And with an increase in the number of animated series and films created there, it has drawn audiences from around the world and many of India’s works have been disseminated internationally. The expanding popularity of OTT, the rise in kids broadcasting viewers, and the accessibility of inexpensive internet connectivity all contributed to an increase in demand for animation. The animation industry has expanded by 24%, and by 2024, it is anticipated that the animation and VFX market will be worth Rs 180 billion, according to the FICCI EY March 2022 report. From a total of 13,600 animation jobs in 2016, the number rose to 16,700 in 2020. As per the estimation of industry experts more than 18,800 jobs in 2025.

Opportunities Provided by the Animation Sector

In terms of employment opportunities, India has now become a hub for animation professionals. As there are many established animation studios in the country as well as training institutes that deal with animation courses. India is now among the leading nations in creating better avenues for creative and animated content development. Not only does it offer talent but also a low-cost option for businesses seeking to utilize motion graphics services.

The Animation, VFX & Game Market offers many opportunities for students to build their careers.  The Animation, VFX & Game Market is equally big both on a regional and global level, generating $28 billion in revenue for the Indian economy. These opportunities are why institutes like Red Apple Learning continue to grow from strength to strength. Red Apple Learning being a game development institute has also expanded its programs in 2D and 3D Animation, graphic designing, and VFX as well. These are all great signs of how much potential there is in this industry.

The Animation Industry is one of the largest, most comprehensive, and fastest-growing sectors in the entertainment industry worldwide. This major growth can be attributed to the increase in demand for Anime, Promotional Videos, Games, and Emerging Technologies such as AR, VR, etc.

The future is looking really bright and hopeful. A recent study estimates that the Indian animation and VFX market will increase to 129 billion INR by 2023. Additionally, a number of businesses are setting trends by providing investors with substantial returns on their investments. That is making the animation sector a prime location for investments. Animation does definitely have a promising future, with an anticipated 35% yearly growth. As a result, there has been an increased demand for training institutes offering animation courses and also imparting animation-related skills. Such training institutes are now present in almost all cities across the world. Reputed institutes are also providing such animation courses in Kolkata. There are many institutes offering courses in different animation-related skills. Such as 2D and 3D animation, storyboarding and drawing, CGI or computer graphics, design etc.