Jobs that Would Make You a Millionaire Before Retirement? 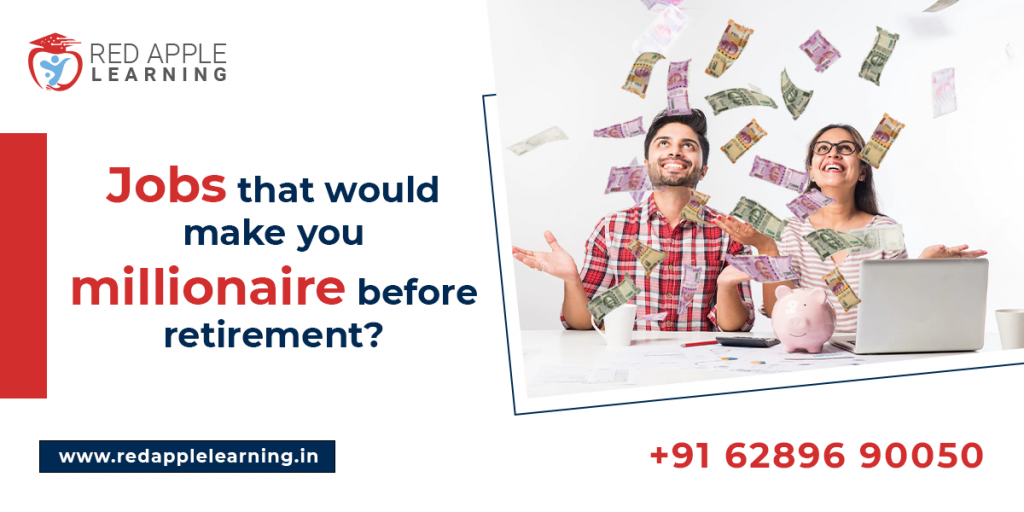 While selecting a career path, many professionals think about their potential earnings. Along with that they also think about the commissions, incentives, bonuses, and investments that raise one’s earning potential. Technology experts nowadays have an access to a wide range of intriguing new options as the world’s unrelenting digital transformation continues. The majority of these positions pay well because many of the talents that the digital world needs are in high demand. Not only that, with the emergence of new-age technologies these professions will grow more prosperous. Hence, today, in this article we will be discussing the jobs that would make you a millionaire before retirement.

Top job roles that would make you a millionaire before retirement:

A full-stack developer deals with a website’s front and back ends. They take on tasks including the creation of user-facing websites and collaborate with clients throughout the planning phase of any project. HTML and CSS knowledge are prerequisites for becoming a full-stack developer. Additionally, you must be familiar with JavaScript and related frameworks. You must be knowledgeable about server-side programming languages like Ruby, PHP, Python, and .Net. Finally, you need to understand how to use MongoDB, Oracle, and MySQL as well. Additionally, for gaining proper knowledge of the programming languages, full-stack development courses are giving full support to the aspirants. In the United States, full-stack developers make roughly $226K annually, while in India, they make about 35 lakh rupees.

Game designers develop the stories, settings, and characters in video games. They work along with a team of programmers and designers that are in charge of bringing the game to life. Making a video game’s aesthetic components is another one of a game designer’s main goals. This career path offers flexibility and personal development as well as financial rewards. As a game designer, you would be able to move from project to project and develop more than just games!

Typically, aspirants need a diploma in game design or other short-term certificate courses to enter this enormously lucrative gaming sector. There are no requirements for graduation in the gaming sector as it is one of the skill-oriented industries. In this sector, skills are valued more highly than degrees. According to Glassdoor, the average salary for a game designer in India is roughly 6,50,000.

(Note: Both the job roles of game designers and developers can do freelancing which results in more money)

Video game developers write the code that drives video games in a number of programming languages. The code needs to be optimized for consoles, computers, and mobile devices. Together, the design team and the developers use their expertise in problem-solving to build a complete game. For the game to run well, whether it is on a computer or a mobile device, the game developers must write lines of code. According to Glassdoor estimates, game developers typically make approximately 5,25,983 each year in India. For applicants with a passion for gaming, reputable institutions offer game development courses.

If your true passion is playing games, then this might be the perfect role for you. Just think of all the free time you would have to practice your favorite game! This job is also more flexible than other roles and has flexible scheduling. And, with a salary range of $28k-$35k, you won’t be living the high life. But, once you move up to QA Manager, that is when the real money begins at $70k-$90k+.

If you love creating games, then this may be the career for you! There are five different roles in this field – art director, animation artist, environmental artist, character artist, and visual effects artist. The art director position has a salary range of $70k-$87k+.

Blockchain technologies are studied, created, developed, and also tested by a blockchain developer. They construct infrastructure, implement security controls to guard against cyberattacks, and support the optimization of blockchain protocols. Decentralized apps are created by blockchain developers, who also manage the network as a whole. A blockchain developer should be knowledgeable about data structures, computer networking, and cryptography. They ought to be familiar with the fundamentals of languages like Python and Java.

They need to be knowledgeable about blockchain protocols like Bitcoin and Ethereum. A blockchain developer with just a few years of expertise may expect to make close to $170,000 in the United States and roughly 22 lakh rupees in India annually.

A mobile application developer studies protocols and creates software for the iOS and Android operating systems. They create interfaces to enhance user experience. They also work together to suggest new features to the product development team. A mobile application developer should be familiar with JavaScript UI and frameworks like React Native and Angular. To create secure and faultless applications, they must be knowledgeable about cybersecurity and skilled in Java, C, C++, etc.

The bitter truth is that there is no quick way to become a millionaire. Being a millionaire requires a lot of hard work. The positions mentioned above do not ensure a millionaire’s salary, but they do offer a route to one if you are successful. You need to be willing to put in thousands of hours of work to pursue this goal. There will be many difficulties. Most importantly, you must make an effort to advance constantly. Always seek out opportunities to develop your abilities, widen your network, and be open to new challenges.