How Lack of Career Awareness Leads to Insufficient Workforce in India?

In a vast country like India, where the youth population consists of more than 50% under the age of 25, means that young people and students would make up the majority of the population. But even now, as time is running out, Indian industries are experiencing a severe crisis of insufficient workforce. Thousands of job roles are lying vacant due to inadequately skilled job applicants. While India is crafting its niche as one of the fastest developing nations, the availability of the resource is still the biggest challenge that the Indian industry is facing. 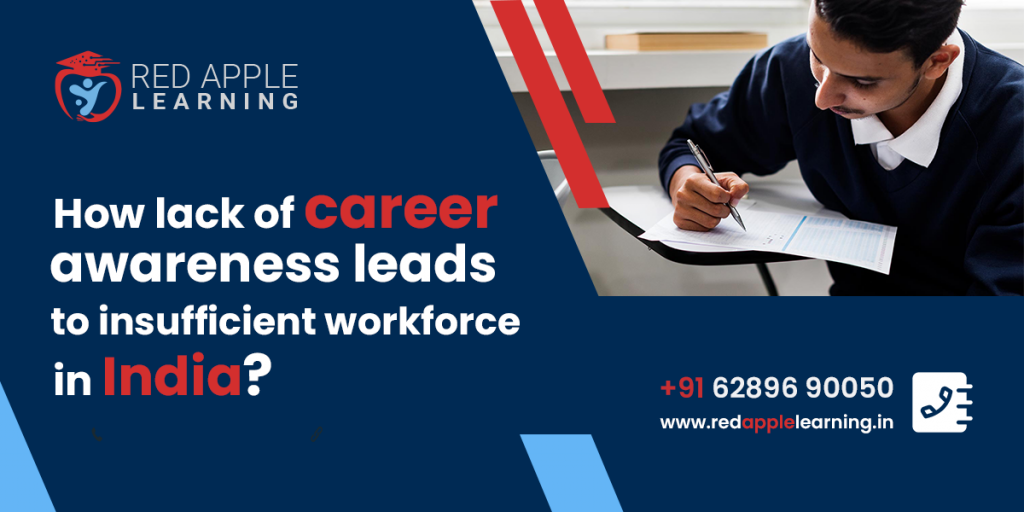 In today’s post, we will be discussing how this skill gap is affecting the Indian economy and how to tackle the situation.

One such promising industry in India is gaming.  It’s about to reach a trillion-dollar mark in the coming years. Even though India cannot boast of any AAA-titled indigenous game, but the back end of several AAA games is being developed in India. Furthermore, the gaming sector witnessed remarkable growth while all other global industries, like transport and aviation, failed during the pandemic. On one hand, when millions of people lost their employment in other industries, the gaming industry at that time was on a hiring spree. Thousands of game developers and designers were recruited in India during Covid 19 lockdown.

Mobile Gaming and Other Technological Advancements

Mobile games and in-app purchases have flung open multiple routes for revenue generation. Numerous businesses have also begun to invest in this industry after realizing the potential of this market. Therefore with the advent of new technologies, new job opportunities have also arrived. Due to that studios are actively seeking individuals with the necessary skills and a passion for gaming. And those who are eager to get into this flourishing business have a number of promising chances. Yes, you got that right! There is an immense number of jobs in the gaming industry. By 2023, the industry is expected to add 10,000 to 12,000 employees, according to the IBEF analysis.

The application of “Gaming Technology” is growing rapidly across a variety of industries, including Real Estate, Medical Science, Education, and Space Research. Virtual production and other futuristic technologies have virtually taken over every business. Additionally, as per Forbes, demand for AR and VR Game Specialists has increased by a significant 93%.

One of the core issues remains skill formation. The skill formation of the labor force remains really low. Why is that? Because the institutions that are providing skills to the upcoming workforce have an inappropriate syllabus. If we consider alternative professional options like an MBA or engineering, 13% of MBAs have an unsuitable syllabus, according to a 2016 survey by the Associated Chamber of Commerce of India (ASSOCHAM). As a result, they are unable to develop into appropriately skilled professionals even after graduating.

Similarly to this, the National Employability Report 2019 found that 80% of engineering graduates in India, although holding degrees from prestigious and expensive institutions, are unfit for the jobs that are currently available. A little over 12.5 of the 1.5 million students who graduate from engineering each year are compelled to work in non-technical professions for meager wages.

Along with that reportedly, 93% of Indian students are aware of just 7 career options. This is the reason why most students fail to achieve their desired career in India because most of them are unaware of other significant career options like Web App Development/ Game Animation/ Virtual Reality/ Machine Learning/ Artificial Intelligence, Game Development &, etc. Millions of manpower are in demand in the Indian tertiary job sector while 93% of the Indian student force is trying to tread the usual 7 career avenues. Whereas, as per Deccan Herald, there is a requirement of 40,000 skilled professionals in the gaming industry by the end of 2026.

Online gaming in India is one of the fastest-growing industries, with massive employment, investments, and revenue that surpass many other media types like film, television, music, and print. In 2025, this industry is anticipated to have 65 crore customers, produce more than 70,000 highly skilled technicians, and support many more people indirectly. This is according to a KPMG report. The following is required for the resolving the problem of an insufficient workforce:

Setting up proper institutions for skilled training is highly required for curbing this insufficient manpower. In India, there are quite a few institutions that offer training, but they are by no means enough. Due to that Red Apple Learning has come up with the goal of resolving the insufficient workforce in India. Our goal as a game development training academy is to ensure that the aspirants’ futures are secure and bright. Our game development courses are designed by professionals in the field. We have also developed our autonomous module of the Incubation initiative where the candidates will be trained to create their own original games and publish those with all the trendy techniques to stand out. This initiative not only focuses on placement support but also on honing entrepreneurial skills. Don’t pass up the opportunity to start your own company and hire staff to help you innovate successfully.

The government is also taking initiatives the spreading more awareness of the gaming industry. Our finance minister Nirmala Sitaraman announced that a promotional task force with all stakeholders will be set up after acknowledging the enormous potential of the AVGC Industry (Animation, Visual Effects, Gaming, and Comics). This will help in spreading awareness of the industry as well.  Moreover, public-private partnerships are actively being expanded as the preferred method for carrying out infrastructure projects. As it aims to develop world-class infrastructure promptly and draw institutional and private sector funding for infrastructure.

It has become necessary for applicants to become specialists in a variety of fields. As the gaming business is currently witnessing new concepts, trends, and practices. The demand for qualified resources is rising along with the number of game developers entering the Indian industry. The majority of the time, Indian game developers struggle to produce the expected performances with efficiency and accuracy. Why? Due to a lack of capable and experienced professionals. Here’s where Red Apple Learning aids the aspirants.

We have established ourselves in the eastern region of India with the express purpose of creating dedicated employees who can keep up with the continuously rising demands. After successfully completing the game development courses, you will receive your desired dream job.