What is the Difference Between 2D and 3D Animation? 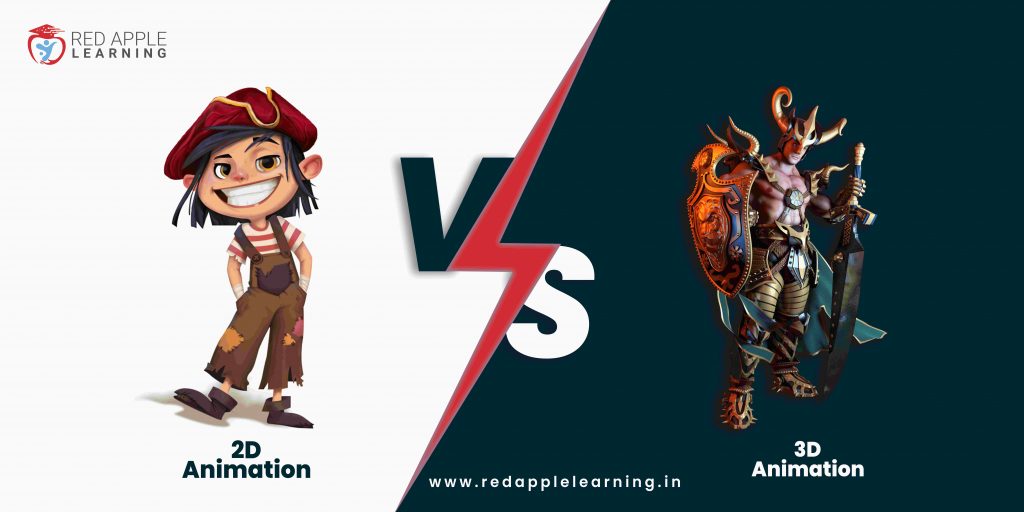 Do you recall how we would run home in the afternoons? To watch Daffy Duck, Mickey Mouse, Bugs Bunny, or Tom and Jerry cartoons?  All these characters fall into the category of 2D animation. Along with that, these TV shows gave us the enjoyment and contentment that come with viewing our favorite cartoons. And they ultimately proved to be our best friends. ( Feeling Nostalgic, Right?)

Although with the advent of 3D animation, all the characters might not be recognizable to today’s youth. But in the world of 2D animation, they were legends. However, the introduction of 3D animation has rendered them look like seasoned veterans. It has completely altered the way that scenes and visuals are portrayed on television.

Many people have chosen careers in technology as a result of this change in the field. What distinguishes 2D from 3D animation, then?  let us dive into this article and learn about it.

Industry Outlook of Animation in India

Animation has been a popular medium, largely prevalent in the television and film industry. There are many large companies based out of India, focusing on animation. In 2017, the animation industry in India was valued at USD 5 billion with over 1000 registered professionals working in specialties such as 3D modeling, visual effects, and character design.

The animation industry in India is around 120 years old. The first-ever animated film made in India was by a British company called the Lumiere brothers. The Indian government allowed foreign makers to produce their animations in India, given the lack of animation industry in India at that time. There has been a steady growth rate of 16% from 2012-2017. It was predicted that due to the exponential supply and demand of new technology and increased spending on entertainment there would be a high demand for workable talent to support the growing industry or there would be a shortage of skilled workers”. It is projected that the Animation and Visual Effects (VFX) market worth more than US$4.22 billion by 2022.

The Animation Industry Association (AAA) reported that the industry in India has a total revenue of US$5 billion and an estimated 10,000 professionals work within India’s animation industry. As per, AAA reports that “Animation is growing with the ever-increasing demand for visual effects and specialties to meet this”.

What is 2D Animation?

2D animation uses a flat drawing in order to create motion and provide life to one or more characters. With 2D animation, one might use pencils, clay, digital software, or sandpaper to create the image. You can combine drawings with sound effects and music to tell a story.  Although, in recent times 2D animation is done with the assistance of software. But the basic requirement of drawing is necessary.

This type of animation is very popular among indie movies because it is low-cost and gives the animator a lot of creative freedom for storytelling purposes.

For instance:  animation has been used in a hugely successful indie movie called “Paranorman” (released by Focus Features in 2012).

What is 3D Animation?

Another popular cartoon-esque style that does not rely on hand-drawn frames but utilizes geometric shapes that are then used as forms for various objects/characters in order to animate them is known as 3D animation. 3D animation uses 3D models to create the image. These models may be structured with simple geometric shapes or made up of complex curves, depending on the style and requirements of each project. The results are then integrated with other elements to create an animated work. 3D animation is much more graphically intensive than 2D and requires a good amount of creative time in order to achieve good results. Studios such as Pixar or Walt Disney specialize in 3D animation because it’s what they do best. For instance, 3D animation has been used in a hugely successful sci-fi movie called GRAVITY (released by Paramount Pictures in 2013).

Difference Between 2D and 3D Animation!

This article will compare 2D and 3D animations as a way to learn more about what makes each type of animation so different.

As an example of this, to create a 3D animation with a cartwheeling character, you not only need to do the actual model but also create a primitive sphere and place it at different heights depending on where you want the character to roll. In 3D animation, you will need to prepare for every scene before you start creating them. Additionally, With the aid of computer software, 3D models are created and animated to move inside a virtual environment. When compared to 2D animation, 3D animation is far more difficult because it involves modelling, animation, and rendering. High-end animation typically uses 3D animation, which is commonly employed in the video game industry, movies, and cartoons.

The time and cost of this type of animation are lesser. As it does not require as much time or money to produce something for it. This is primarily because fewer people are needed to produce the same amount of content in a shorter amount of time.

The time required to produce 2D and 3D animations is different. As 3D animation requires more time and resources in the long run. This is because everything must be done on computer software, which takes a lot longer than you might think depending on your skills and the amount of time that you have invested into learning them.

How to Get into the Industry as a Skilled Professional?

There is a huge demand for animators. The best way to break into the industry as a skilled professional is with the assistance of animation courses. Red Apple Learning is one such trusted institute who is providing animation courses in Kolkata. The young aspiring minds who want to get into this animation industry; they should consider their career options early in their education to ensure the fact that they meet all the professional criteria for joining the industry.