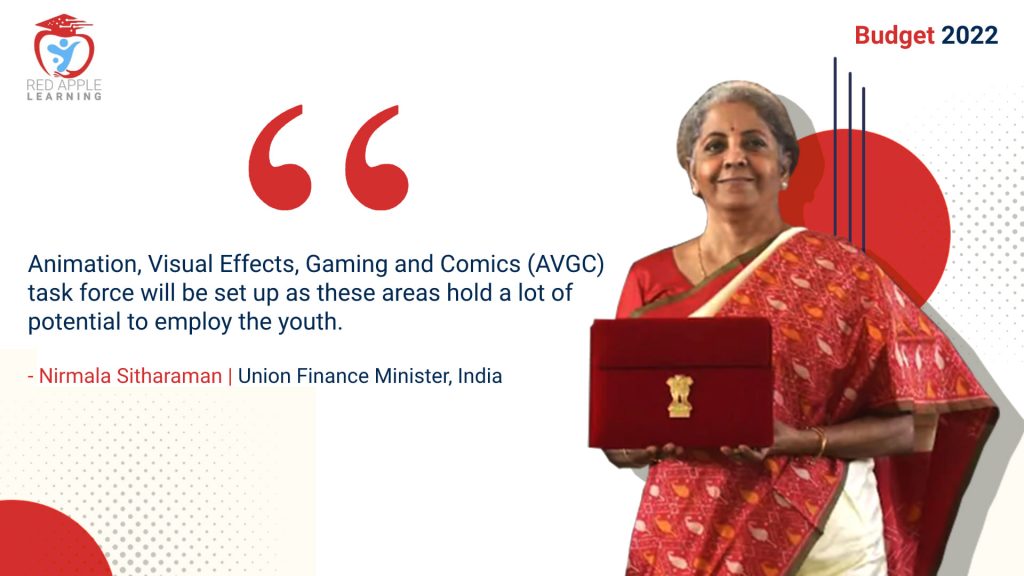 Gaming industry have the fastest growing segment under sub category of media and entertainment sector. And it is also one of the few industries which have a huge amount of possibilities of job generation. Along with that it is also giving an immense amount of opportunity to the youth of the country as well. In an event named “Aatmanirbhar Arthvyavastha” our honourable Prime Minister Shri Narendra Modi announced that the Union Budget 2022 proposes “to make a four-fold increase in public investments as compared to those in the UPA regime and that the measure will open up immense opportunities.” After that event he also described the Union budget as “People friendly” and “progressive”.

“An AVGC promotion task force with all the stakeholders will be set up to recommend ways to realize this and build domestic capacity for serving our markets and the global demand,” Sitharaman said in her speech.

After acknowledging the huge potential of the AVGC Industry (Animation, visual effects, gaming and comic), our finance minister Nirmala Sitaraman announced that a promotional task force with all stakeholders will be set up which will help in building a domestic capacity for serving the Indian markets and along with that it will meet the global demands as well.

Now, the industry experts from the gaming sector are quite impressed with this decision as they are of the opinion that the task force will assist to expand and prosper the workforce of the young and employable aspirants who wants to join the industry as a part of AVGC professionals. Welcoming their decision, the experts are predicting that in the coming years this decision will transform India into a global player in this entertainment space. As the taskforce will issue the long term policy which will boost the vibrant ecosystem in animation and gaming.

The chief financial officer of Games24x7, Mr. Rahul Tiwari said that “ India have a great possibility as it is a very high quality talent pool of creative and aesthetic artists who can help to transform India into a global player. He is really hopeful as it can van bring a clarity in the sector. He has also said that in the last few years this sector have immensely contributed for India’s success for start-up.”

CEO of The All India Gaming Federation (AIGF), Roland Landers, said that the plans and the schemes which are proposed for the gaming sector are really encouraging.

He also said that “AIGF is looking forward as the task force will give a major turbocharge to the game development sector and it will also give a momentum and a power to the gaming industry. The domain experts of AIGF and the skill games will assist as they will be playing a important consultative role.” He also added that the four years of extension of the tax will give a boost to the entire start up ecosystem which is in the excess of 300 companies.

With all these implementations the gaming industry is becoming one of the most powerful sector. The constrain of this industry still lies in manpower. As per Deccan Herald, the gaming segment has been attracting investments and as per the industrial experts the industry will also generate 60,000 to 80,000 new jobs by the year 2025. The gaming sector is  transforming into a magnetic sector for the job seekers. The gaming industry have a high potential in generating huge amount of jobs for the youth who are really career conscious.

This promotion task force of AVGC can lead to a job generation and employability which will be in between 50,000 to 85,000 in the coming years under the support and guidance of AICTE. so there will be various job oriented courses which will assist in the employabality to a great extent. On the other hand, the technology is also evolving faster than the speed of the sound. With the changing technology the aspirants who are willing to join this industry should also embrace the new age skills like NFT, AR, VR, and metaverse.

As per Gautam Vora, the business head of Team Lease Digital,  There will be huge opportunities in 3D animation, testers, VX, game design, and game development.

The vice president and general manager of Zynga, Akshay Bharadwaj said that  “ the task force of the sector will assist the young aspirants to choose the gaming industry as a career option, which will automatically generate jobs and consecutively will put a tick on the economic growth as well.”

On the other hand, B.S. Srinivas ,”The central government’s decision to support this sector by setting up a task force for the growth is a warm welcome move which will herald the dawn of sunrise sector to reach immense heights in the coming years”