What are The Reasons to Choose React. JS for Front-End Development?

If you are a front-end developer or a full-stack developer who is looking for your next new software framework, it’s time you gave ReactJS a closer look. Learning ReactJS can significantly improve the performance and reliability of your application by integrating the most popular programming paradigm, MVC, with JavaScript. This means you can let your front-end developers do complex work such as animations and node state management while letting coders build out complex UI components easily. But what are the reasons to choose ReactJS, here in this article we will be discussing about that.

As we all know it is an open source project which means it has a large developer community, making it easier to get help or work on bug fixes as well as contribute to the community by submitting bug fixes or new features. Now, Let’s start the article without wasting much time. 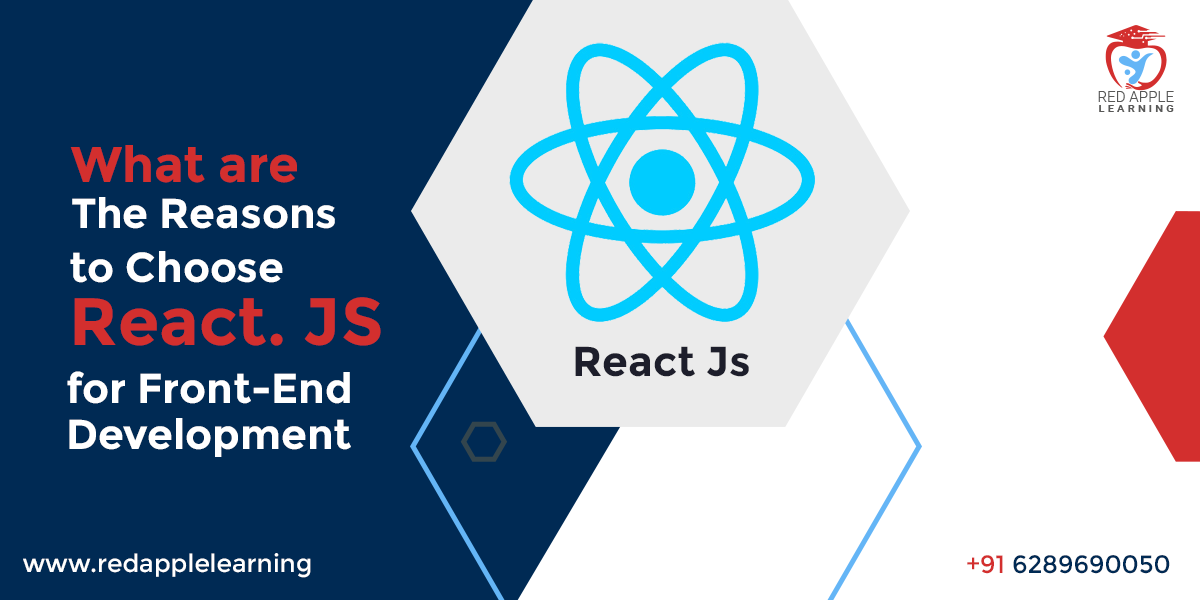 ReactJS is an open-source JavaScript library developed by Facebook that allows developers to compose user interfaces using virtual DOM diffing. It also provides a set of tools and abstractions that allow different components of the application to be updated with minimal effort.

In this section we have written a few key reasons to choose ReactJS for front-end development:

Firstly, it is easy to integrate ReactJS into existing applications. It also has a solid and well-defined API, which makes it easier to use, and encourages the developers to contribute instead of making their own projects, which is good for the community. ReactJS is also optimized for speed and can easily be used for high-traffic sites with up to 10 million requests per second (RPS). It uses virtual DOM diffing and server-side rendering to reduce the size of the entire application by 30% – 40% on average. It also reduces boilerplate code by 90%.

ReactJS is a UI library and is not used for defining application logic, unlike AngularJS and Backbone. The code of ReactJS apps can be reused easily to create native mobile apps using the react-native platform which uses the same API as ReactJS.

ReactJS makes it easy to create reusable components that are optimized for performance with little effort. You can also save time by reusing your own code in the new UI you are building. It’s easy to debug since it will only update the parts that have changed rather than rerendering the entire interface. The external state management technique helps reduce boilerplate code required to synchronize data between different points in a ReactJS application.

ReactJS has multiple features that are able to update only the changed parts of your interface based on user inputs. It also makes it easier to write reusable code and perform operations on data imported from other sources such as JSON files. The Flux Architecture in ReactJs helps in organizing your application and dealing with the state of data flow. Additionally, it also allows smaller updates on larger chunks of data instead of updating everything at once.

ReactJS also allows you to create reusable UI components that can be used for building multi-page applications with an ease. It is also easy to debug since it is a single-page application and doesn’t need to deal with page refreshes.

The reusable UI components can be assembled on the fly in any given context which increases flexibility in terms of features and performance. This allows a large portion of the app to be easily redirected, which is useful for changing environments, devices, and user preferences.

ReactJS has a limited set of features that are optimized for building interfaces. This helps the developers focus more on performance and maintainability since there is no need to learn multiple frameworks simultaneously. It also helps in reducing the time for debugging and setting up new features.

ReactJS has predefined components which help write clean code as it provides a lot of reusable components that cover the most common use cases. It also has a stable community with an active developer community working on it constantly. That allows for quick fixes and updates when bugs are found or new features are requested by users.

The ReactJS core team is also working on making it easier to write components that are easily reusable. ReactJS is an open-source project initiated by Facebook Inc. It is currently used by companies such as Netflix, Dropbox, New York Times, Airbnb, and Instagram. One of the features of ReactJS is that it allows front-end developers to build user interfaces. They are reusable and capable of being updated quickly when the state of the application changes. This helps developers work on creating new features without having to worry about creating a solid interface for users. It also allows for greater flexibility in terms of output since it can be rendered across multiple devices with ease. ReactJS is widely used for building user interfaces, mobile apps, and all other kinds of front-end applications.

How to Break into the Industry as a Professional?

The best way to get into the industry as a professional is with the assistance of ReactJS courses. Red Apple Learning offers a comprehensive ReactJs course to aspiring tech lovers. Additionally, this course will assist students in learning how to deploy applications, work with Redux, and employ important differentiators. The curriculum for the ReactJS course is structured in a professional manner. So that inventive minds will master all the practical skills needed to enter the IT industry.