Game designing is “A new age career” option for young tech minds. These days, the gaming industry has become one of the most demanding and one of the most sought-after, and lucrative career options. If we look into the industry outlook of the gaming sector; since 2019 the segment of video game designers and game developers has been seen in an upscaling position. 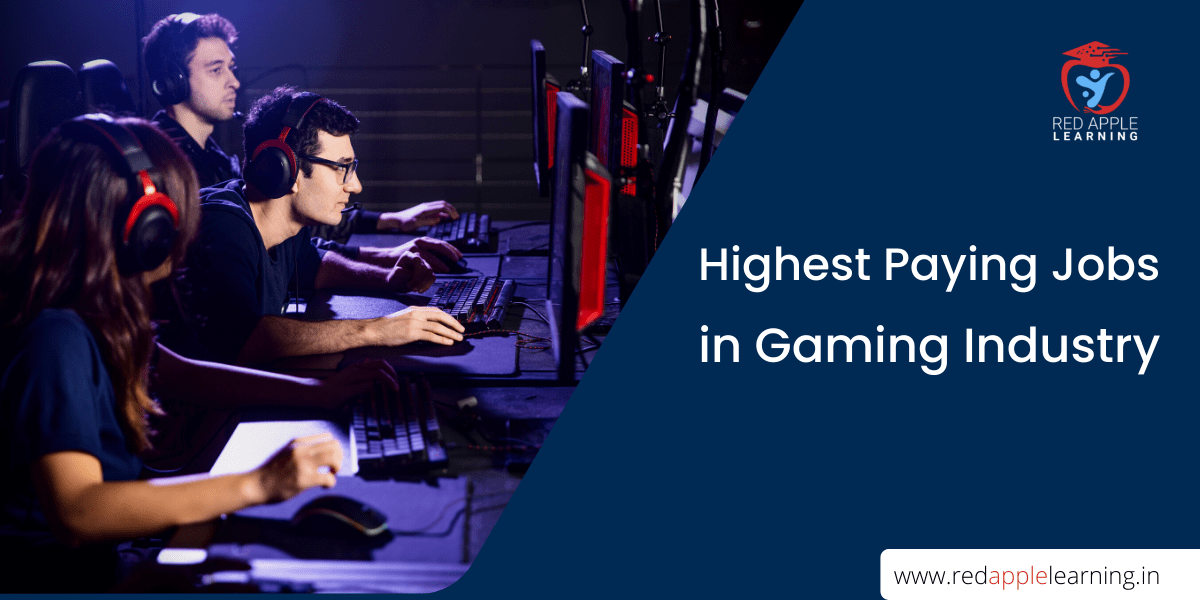 Here’s all you need to know about video game professions, including some of the highest-paying positions in the gaming industry.

With job opportunities expanding in the gaming industry, it is important that managers and HR professionals evaluate the skills required by future hires. Growing older and more diverse demographics are demanding that employers learn to adapt as well as hire for a variety of skill sets. Additionally, if we look into the job outlook of the industry, then since 2019 the segment of video game designers has seen an upscaling position. And the demand for game developers is expected to go up, about 32,090 new jobs to be filled by 2029. This shows an annual increase of 2.28 percent over the next few years. Read: Reasons to join gaming industry.

Here we have listed the top 10 highest-paying job roles that are in most demand:

Plots, situations, and characters are created by video game designers. They collaborate with a group of designers and programmers that are in charge of giving the game life. Additionally, one of a game designer’s primary objectives is to create the aesthetic elements of a video game. In small-scale production houses, the game designers have to design the level of the games as well.

Typically, for sliding into this massive prosperous gaming industry; the aspirants need a diploma in game designing or any short-term certificate courses. As the gaming industry is one of the skilled-oriented industries; there are no such criteria that one has to complete their graduation. This sector gives more value to skills rather than any degree. The game designer tends to get paid around ₹6,50,000 in India as per Glassdoor.

Before the video/ mobile games are made available to the general public, quality assurance testers have to make sure that the game doesn’t have any flaws or bug issues. Additionally, they have to play the games to uncover flaws. They have to notify the development team of the bugs or issues (if any). These flaws could be coding errors, graphic flaws, or it might be gameplay discrepancies. The QA testers tend to get paid around  ₹5,11,341 in India as per Glassdoor.

The code that powers video games is written in a variety of programming languages by video game developers. For consoles, PCs, or mobile devices, the code must be optimized. The design team collaborates with developers, who apply their problem-solving abilities in creating a full-fledged game. However, the game developers have to write lines of code for a smooth movement of the game; be it mobile or a pc game. The game developers tend to get a salary around ₹5,25,983 per year in India as per the reports the Glassdoor.  Reputed institutes are providing game development courses for passionate aspirants.

The game programmers are the reason for getting a flawless gaming experience on consoles and other mobile devices . They check those game items interact properly with one another and fix any flaws that quality assurance testers found. As per the reports the Glassdoor, the game programmers tend to get a salary of about ₹8,97,796/ yr.

By using several techniques, such as freehand drawing, to create the game’s characters, environment, and items, game artists design the aesthetics, game art, and visual style of the game. Additionally, they might also create the manuals, packaging, and promotional materials for the game. The salary for a 2D Game Artist is ₹44,831 per month in India, as per Glassdoor.

Video game animators practice technical arts. They produce animated graphics, including gaming characters or backgrounds, that bring the game’s world to life. However, animators typically employ specialist software. Additionally, they must have vivid imaginations that enable them to see the work itself as the result of their efforts. As fresher, the game animators can get a salary of around ₹19,339 per month in India (as per Glassdoor reports).

Lead game designers are in charge of a game’s appearance and gameplay experience. They have to collaborate with a small team of game designers and game developers to determine the plot, the characters,  and the props as well.  The lead game designers are the ones who determine the budgets and deadlines. They perform a wide range of tasks depending on the production houses they are working in. Additionally, they also have to work with lead animators, creative directors, and gameplay designers in major/high-scaled studios. This professional gets a salary of around ₹15,00,000 per year in India.

The video game market is constantly expanding and growing at a large pace. According to the Bureau of Labor Statistics, employment in the arts and design fields is expected to increase by 4% between 2020 and 2030. Because of this, we can promise you that this is a field you shouldn’t be hesitant to enter. However, if you are keen on the gaming industry then you should go for it. From game design to game creation, there are many different careers to take into consideration.