The game development industry is changing more and more these days, often a result of technological advancements. With the introduction of games such as Candy Crush and Angry Birds, mobile gaming has become a popular part of video game culture. While the $118 billion gaming industry has prospered despite the COVID-19 pandemic’s devastating effects on countless businesses worldwide. A significant portion of people now uses gaming for entertainment, stress relief, relaxation, and keeping connected to the outside world when in lockdown. As a result, gaming revenues increased globally by 20%, and in India alone, 20,000 new jobs were created in 2020. In this article, we’ll take a look at some of the highest-paying job roles in the video game industry. 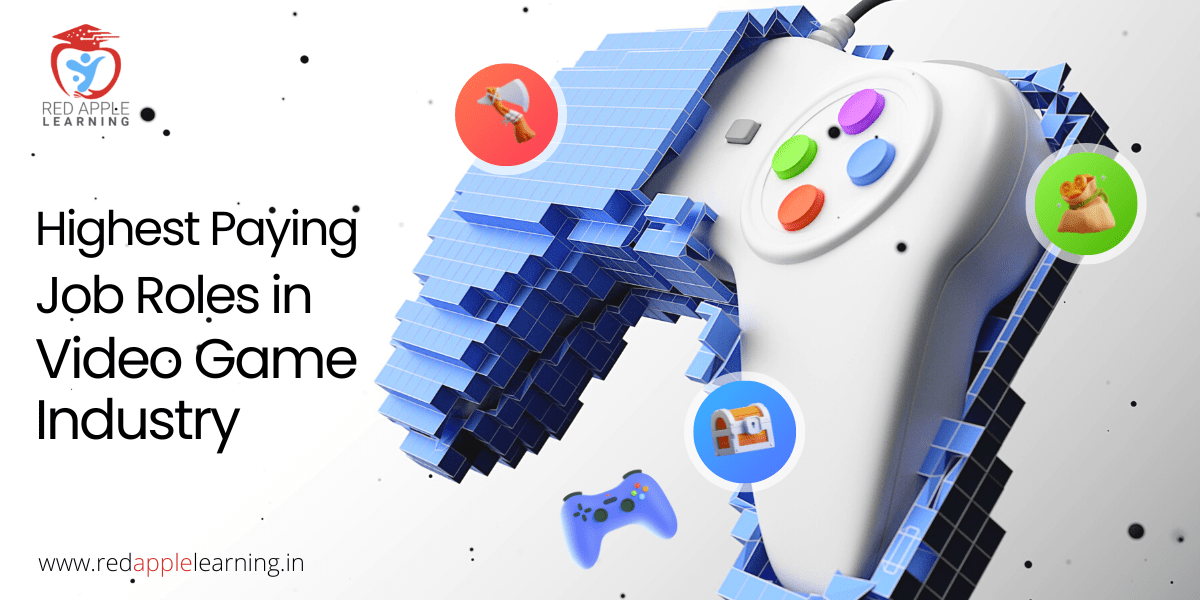 But first, let us throw a light on the industry outlook.

The gaming market is rapidly evolving. The global gaming industry consists of over 300 billion dollars worth of revenue every year. This numerical is expected to double by 2024. According to research from Newzoo, there are 439 million gamers worldwide (which would mean an increase of over 90 million people from 2016), and China has successfully become the world’s largest gaming market by revenue ($25.5 billion).

The Indian gaming industry has been steadily growing for the past couple of decades. However, it is still in its nascent stage and has a lot of potentials to grow in the future. The Indian government is also making prominent investments in the gaming industry so that Indian Gaming Sector can grow exponentially. According to Tracxn Technologies, spending in the gaming industry increased 108 percent in 2021, from $212.9 million to $ 443.3 million. The online gaming industry was estimated to be worth Rs 13,600 crore in 2021 and is projected to increase to Rs 29,000 crore by 2025, according to a recent KPMG analysis.

Why India is a Great Hub for Video Game Development?

We can divide the Indian Gaming Industry into three main categories: mobile games, PC games, and console games. A look at what each category can offer will show you why India is a great hub for video game development:

With close to 1 million smartphone users per month, India offers enormous potential for mobile gamers as well as mobile game developers alike. Due to mobile and internet penetration, the gaming users have taken a flight.   The Indian mobile gaming market is expected to grow at a CAGR of 42% over the next few years.

India has always been an important destination for PC gamers. With the booming B2C e-commerce industry and increasing popularity of online retailers like Flipkart and Amazon, it has become a feasible channel to promote and sell PC games in India. This has led to the development of popular games like Grand Theft Auto V, Counter-Strike: Global Offensive, etc. Above all, PC gaming is not slowing down anytime soon in India.

Console games are very popular in India where the average age is quite young. The boom in this genre of games is reflected by the launch of some of the most popular console devices like PS3, PS4, Xbox 360, and Xbox One which have already gained significant popularity in India. This has led to big publishers like Microsoft and Sony developing exclusive titles for their consoles.

Overall, the gaming industry in India is full of opportunities. With a growing Internet and smartphone user base, the number of gamers is expected to grow exponentially over the next few years. Hence, the future looks bright indeed for those who want to get into this industry as an industry professional. Game development courses are providing those aspirants with great help.

Video game development is an industry that has recently seen a rise in competition. The last few years have been incredibly exciting for the industry, with technological advancements. Hence, in this section, we will be looking into the demanding job roles in the video game industry. Where you can shine your career as a gaming professional as gaming is such an industry that is always evolving and growing.

The game developers aid in turning a game’s concept into a playable reality. To achieve this, they program functionality, code visual aspects, and test iterations until a game is ready for sale. A career in video game production is extremely lucrative. They’ll also create software libraries and libraries that will boost the efficiency of other developers’ work. There will soon be more opportunities for these developers can also create non-programming components in order to make a game run more smoothly or to expand a game’s capabilities.

Video game designing is at the top of the list of ideal careers for those who want to get into this industry as a professional. They have the responsibility to create narratives and characters. And then directing them via production, they bring those concepts to life. They work along with other programmers, audio engineers and  artists, on the development team. Game designing is one of the most sought-after jobs in the video game industry.

In order to ensure the quality of video game production, game testers conduct quality assurance (QA). They ensure that games operate properly and provide clear instructions and documentation. They pinpoint issues and defects and inform designers and developers about their findings.

Tools programmers specialize in making tools for game developers. Firstly, they create a tool from scratch, and then, when a tool is made, they work to improve its usability. Tools programmers may also write scripts to help people complete certain tasks within the development environment. Such as writing a script which allows an artist to create 50 objects in 20 seconds rather than one object in 20 minutes.

An engine programmer is responsible for the core application programming interface (API). And they also underlying code-base on which games are developed. The gaming engine that powers the game is created by engine programmers. To make the engine as efficient as possible, they add new features and rework the current systems. The engine programmer will determine how to design the optimal engine for that specific game. They also take care of any technical issues that arise along the route and correct problems.

How to Break into the Industry as a Beginner?

Taking a game development course makes it simple to become a skilled professional. These game development courses provide a tech aspirant with an industry-based curriculum. As the industry is experiencing its biggest boom in recent years. Now, game companies are eager to hire more qualified workers with a deeper knowledge of technology and video games. Enroll your name in a trusted institute and break into the industry.