What are the 5 Reasons to Learn Node.JS? 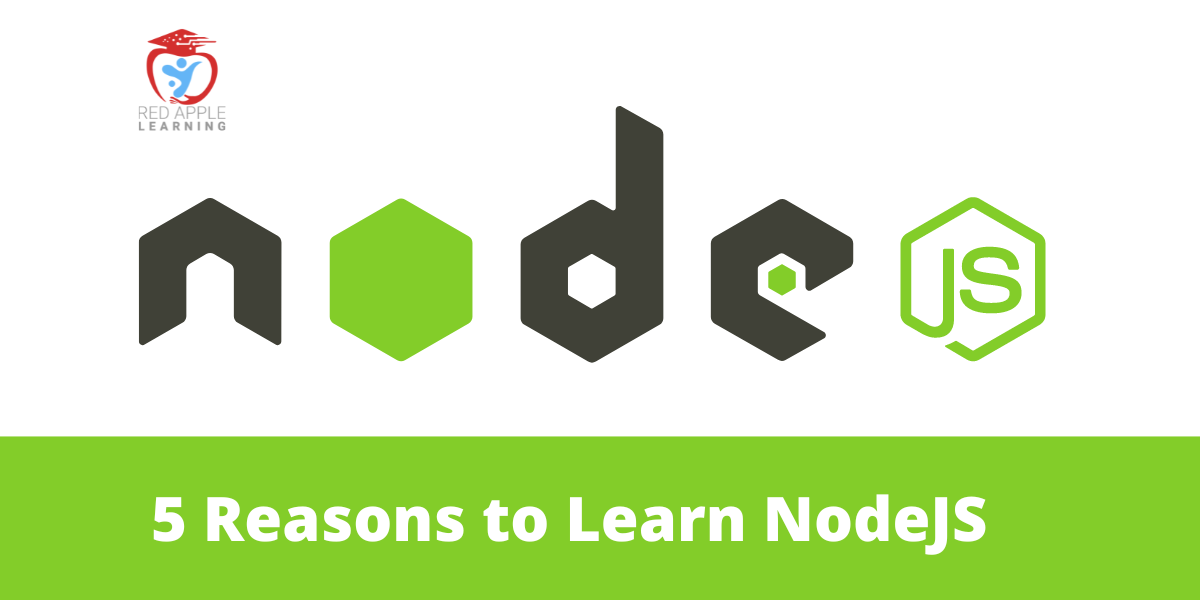 Node.JS is one of the most demanding programming language these days. Building scalable network apps is easy and quick using Node.js. It also gives the web developers who wish to be knowledgeable about each and every aspect of a web application a significant advantage. But Node.js is a useful tool that any aspiring web developer should have in their arsenal. But what are the reasons to learn Node.JS? Here in this article we will be discussing about that.

Node.js is a JavaScript-based open-source server-side platform that utilizes an event loop and non-blocking I/O. It allows programmers to easily create web servers, often with fewer lines of code than would be needed for other languages like PHP or Apache mod_perl, and without requiring experience in event-driven programming as with C# or Java programming, because it uses JavaScript on both the server side and browser side. Some examples of companies who use (or have switched to) Node.js include Walmart and Yahoo!

Node.js enables web server software written in JavaScript to respond to events such as user interactions with the browser. It can also be used for general purpose programming, including desktop GUI applications like chat clients or games or server-side software , or power device drivers, robots, or other hardware that needs real-time control and fast responses. Node.js simply allows an application to open a socket on a port and begin receiving input without having to wait for an entire HTTP request to come over the wire first (as is common in Apache mod_php).

The basic premise of doing so is to allow faster execution, but it also enables developers to create more scalable and robust applications. Node.js server applications  which handle the I/O asynchronously and can easily handle thousands of concurrent connections. In addition, Node.js applications are faster than web applications written in JavaScript because the client-server communication is driven by an event loop instead of a polling loop (which a poll loop inherently induces).

Node.js enables web applications to be written in JavaScript, which is designed for being run in the browser. In Node.js, every application is a network server and also a client. This means that JavaScript has been extended to include asynchronous I/O, which is commonly used (but not required) by server-side applications such as Apache Tomcat or IIS, as well as games and other non-browser-based programs. Node.js also supports asynchronous socket programming which allows the developer to write programs without blocking the main event loop and enable concurrent requests on a single socket connection with no additional overhead.

Here are the five basic reasons to learn Node.JS:

The first is that JavaScript has a single-threaded execution model. This means that the browser will execute scripts in order but it doesn’t necessarily mean that it will do this in real time. This can cause delays when code waits on an external resource, such as fetching information from a database or making an API call to retrieve data required to render the next page of content on your website.

NodeJS uses a non-blocking IO model. This means that NodeJS makes asynchronous requests to external resources and when the request is finished, simply executes JavaScript code without pausing. No other event such as an external API call will cause the script to pause, making that request completely non-blocking and much faster.

This is precisely why NodeJS is so fast. It allows developers to write code that waits for external requests to complete before continuing, thereby avoiding any delays caused by single threaded execution of JavaScript across browser limits.

The NodeJS framework is also widely used by Uber, PayPal, LinkedIn and all worldwide powerhouses. If these major brands are using it, then it’s obviously a well-known invention right now and something to keep in mind while you’re expanding your employable range of skills and making career options.

JavaScript, which is used to create NodeJS, is one of the most well-known and widely used programming languages. Thus, lifting it will require less time and effort from you even if you are a less skilled JavaScript creator.

Node.js is famous for its adaptability, which is what makes it so popular. Everything is executed by Node.js in a single string. This one string is dependent on the situation (due to JavaScript being the language that it is composed with). Additionally, it is non-blocking. Currently, whenever a new client establishes a connection with a server in your Node web application, an occurrence is dispatched. This event is handled concurrently with other events that are taking place or clients interacting with the server. This would cause the server to slow down after a large number of customers in web applications that used several advances. In contrast, the non-blocking event-driven architecture of a Node application allows for the consideration of extremely flexible applications.

This allows businesses that are trying to scale to create their applications using Node, which will prevent any lulls they may have had. Additionally, this means they won’t need to invest in as much server space as someone using a web application that wasn’t made with Node.

The best way to get into this industry is with the assistance of node js course. Red Apple Learning is providing Node.JS course. The tech enthusiasts will be fully eligible for the job role of a Full-stack developer. The curriculum of Node.JS course  is designed in such a way that the creative minds would get to learn all the practical skills that is required for getting in the tech field.