Data released by the Centre for Monitoring Indian Economy (CMIE) showed that 13 million jobs were lost in June alone. As per the data, India’s unemployment rate increased to 7.80 percent in June. The data also revealed a staggering 45% unemployment rate for young Indians ages 16-24 which is over three times higher than what it was two years ago. On the other hand, if we look at the gaming industry we can see a “Ray of Positive light”. Worried, prior to the Covid-19 pandemic’s outbreak two years ago, Indian parents from all socioeconomic groups routinely encouraged their kids to avoid playing video games. It was seen as being very taboo back then. But now the scenario has totally changed. The jobs in the gaming industry are rising at a high pace. 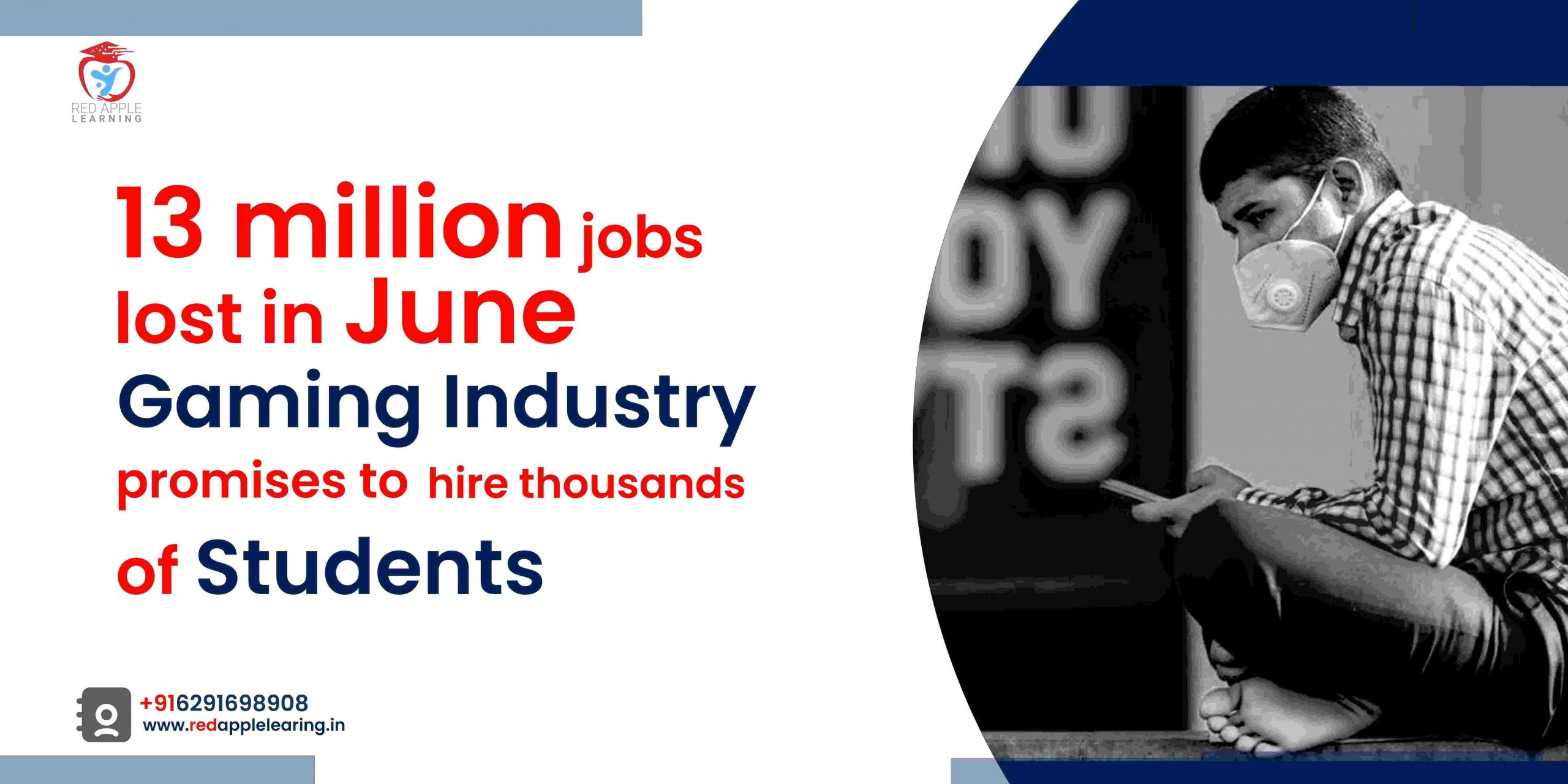 How Gaming Industry Has More Potential Than Other Industries?

When the pandemic wreaked havoc on countless enterprises around the world, that resulted in numerous lockdowns and restrictions. Along with that world’s largest industries collapsed and millions of people lost their jobs. On the other hand, during the lockdown, a  significant portion of people at that point choose gaming for entertainment, stress relief, relaxation, and a link to the outside world.

But this pandemic has altered the whole gaming environment in India which is now one of the current market leaders. In the first 9 months of the lockdown in 2020 itself, India ranked number one in terms of game downloads worldwide. According to the recent data from the All India Gaming Federation (AIGF), at least 40,000 in the game industry of India by 2022. The video game industry is one that has been steadily growing over the last decade and shows no signs of slowing down.

As per the reports of the Deccan Herald, 40,000 manpower is in need by 2024 in the gaming industry. Professionals such as game developers, game designers, game programmers, and 3D artists are in huge demand. The only constraint the gaming industry is facing is the manpower pipeline. On the other hand, if we look at the other career prospects like MBA or engineering according to the report of Associated Chamber of Commerce of India (ASSOCHAM) 2016, 13% of MBA’s are with an inappropriate syllabus.

Due to this even after graduation, they are not able to become properly skilled workers. Similarly, according to the National Employability Report 2019, 80% of the students who have passed engineering in India, despite having a degree from a reputed and expensive institution, are not suitable for the job as per the demand of the market. Although about 1.5 million students pass engineering every year, about 12.5 of the millions of students are forced to work in non-technical fields for low pay.

From Real Estate and Medical Science to education and space research, the use of “Gaming Technology” is increasing at a very high rate. Futuristic technologies like Simulation, Virtual Production are dominating almost each and every industry. As these futuristic technologies are growing at a higher rate; with time none other than all these technologies is gaining more employment than any other industry.  According to Mark Zuckerberg, Elon Musk, and Larry Page, CEO of one of the world’s leading technology companies; the future of International investment is increasing exponentially through Metaverse, Artificial Intelligence, Virtual Reality and Augmented Reality.

What are the Reasons to Choose Game Development as a Career?

The gaming industry is a great example of how a tech-driven economic sector can create good-paying jobs across. There are a huge amounts of jobs in the gaming industry. In this section we will discuss the reasons to choose game development as a career option:

The Flair of Creativity With Programming Language

The ideas, structure, and rules of a video game are conceptualized by the game developers. Some specialize in more creative fields like scriptwriting or level design; while others focus on game-play design or level mechanics. In either case; using both technical knowledge and artistic and creative abilities will be part of your job as a game developer. To outline how different components of the game will operate, such as how a character deals with barriers in the game or how the player obtains a score in relation to completing objectives, it is essential to be analytical and structured.

Steadiness in a Dynamic Industry

The video game industry is ever-evolving and evergreen. Throughout your career, you’ll have the chance to learn new things, and there are never any boring moments. Additionally, you’ll benefit from the stability of a permanent career because the video game industry is well established. As per the reports of FICCI, the gaming industry is predicted to reach $250 bn by the year 2023. The industry experts are of the view that this flight of the segment of the gaming industry is not slowing down soon. Hence, for those who want a profession in this prosperous industry then it is the right time. Well, there is a famous saying that strike while the iron is hot, so it’s the best time!

Work in an Enthusiastic and a Casual Environment

The culture of game development is distinct from that of any other industry. The dedication, enthusiasm, and creativity of employees who are living their passions are inspiring. As a game developer, you get to experience the utmost gratification of producing a product that you love and that others will enjoy.

Game developers are a subset of software developers as a whole. The 2021 Occupational Employment Statistics from the U.S. Bureau of Labor Statistics show that software developers earn an average national yearly pay of $120,730. Based on location, years of experience, years of specialty within the profession actual salary may differ. Even India is also emerging as a leading game-producing country. The government of India is also playing a crucial role in the promotion of this country.

How to Reach out to the Industry as a Beginner?

With the help of game development courses it is now easy to be a skilled professional. Game development courses provides a young tech aspirant with an upgraded and industry based curriculum. With the industry just experiencing its biggest boom years. Game developers are now looking at hiring more skilled manpower who have a better understanding of technology and video games. The video game industry also has the advantage of being more “nimble” than industries like banking and others. The video game industry not only provides people with jobs. But careers that gave them a chance to thrive and advance further up the corporate ladder.